HomeArticles7 Facts You Didn't Know About The Overwatch Cast 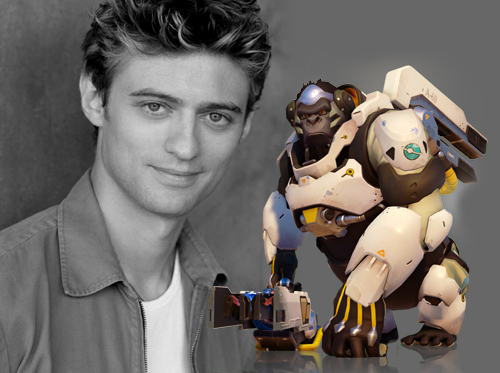 With its robust cast of colorful and fun characters, it’s no wonder Overwatch’s heroes are loved around the world. Numerous cosplays and fan art can be found all across the internet for all to see, including those who gave life to those very characters. So enjoy this love letter to unseen in this edition of 7 Facts You Didn’t know about the cast of Overwatch.

Performance matters in video games. A good voice actor can bring a character to life, leave an impression, and give you enough that you, the player, feel something. Whether that’s a protagonist you can rally behind, an antagonist you loath, or an NPC you just keep going back to everytime you’re in town. Overwatch has a talented roster of voice actors that we all love, but we are also lucky enough to have a cast that loves us back. Overwatch’s voice actors can be seen at conventions dancing with fans, announcing new additions to the game, or in videos on social media talking about events, holidays, or just hanging out with cast mates as friends (in AND out of character). So to start things off, let’s start with the loud, proud and lovable…

Darin De Paul is an experienced actor having performed on Broadway, Off-Broadway, in regional theaters and on national tours, and like many of the voice actors in Overwatch, has done work with Blizzard before. He was Blackhand, in World of Warcraft, as well as numerous other varied voices and has also lent his voice to several Hearthstone cards.He actually originally tried for Winston, but instead landed the glorious Crusader instead.

De Paul has said he based Reinhardt’s voice after his late father and expressed he felt him most come out in one of his quieter lines, “Precision German Engineering.” The line’s delivery came about with De Paul exploring quieter lines for Reinhardt since the several previous ones had involved boisterous shouting. What? Reinhardt? Loud? Pffft!

He says his first voice over role was as a troll which is a fun coincidence because Reinhardt would most likely beat the crap out of troll.

Darin De Paul loves fantasy and has been a guest on fellow Overwatch star, Matt Mercer’s Dungeons and Dragons series, Critical Role. He also co-hosts a geeky talk show with Amy Vorpahl entitled “Darin & Amy Have To Do A Morning Show”.

2. Matt Mercer, the voice of McCree

In case you didn’t know, Matt Mercer is not only a talented voice actor but an excellent dungeon master, which is why he was perfect to narrate the trailer for Hearthstone’s latest expansion of cards, Kobolds & Catacombs which is heavily based on the tabletop games of old. That’s right, this gunslinger can also belt tunes.

But Mercer wasn’t always McCree. In fact, when the Overwatch cinematic reveal played at Blizzcon 2014, Matt Mercer said “I wish I could be a part of that.” That means, when we all saw McCree for the first time, Matt Mercer didn’t know he was looking at who would be one of his most iconic characters.

Actually, he later got the chance to audition for the role, he almost didn’t make the cut. He did a more serious take and didn’t get called back but the casting director gave him another shot. Ha, get it?

Ever since, Matt Mercer has been very happy about having the part. In an interview, Mercer mentioned he plays the game for fun and has trolled his own teammates by saying “It’s hiiiiigh noooon” over team chat. I’m also sure most of them figured it was a soundboard rather than allow themselves to believe they’re playing with the REAL McCree. So much so that Mercer was once severely burned by a teammate for his less than prolevel shooting over voice chat.

Don’t worry, Mercer, you got plenty of other beloved characters in plenty of other games. He’s the voice of McCreedy from Fallout 4. Which by the way, he booked BEFORE landing his role of similar name in Overwatch. But Matt Mercer isn’t the only Overwatch voice to appear in the nuclear wasteland..

If you head over to Nuka World in Fallout 4, you may catch a familiar voice, albeit with a much less civil tongue. Anjali Bhimani voices Nisha, a psychopath who leads a group of raiders known as the Disciples. On the opposite end of the spectrum, you can spot her as loving mother, Nina Patel in Modern Family. Talk about range. If you wanna see her somewhere in the middle though, check her out on Criminal Minds: Beyond Borders, season 1, episode 2, where she plays a mob boss in India and she is terrifying.

If you were lucky, you may have also seen her on Broadway in Andrew Lloyd Webber’s hit musical Bombay Dreams, as Bollywood diva, Rani in the early 2000s.

Don’t worry though. If you’re just getting on the Bhimani train now, you can subscribe to her channel on YouTube, Sweetanj where she documents all sorts of adventures, many of which include other Overwatch voice actors, as well as life advice in her series, “I Am Fun Size.” Which is named as such because she’s just five feet tall. She’s of course, not the only Overwatch star you’ll find on YouTube.

Found at simply, Jonny Cruz, his “Lucio runs into Overwatch Characters” video went viral in late 2016 on YouTube and instagram which showed Jonny in character as Lucio talking to other Overwatch voice actors at Blizzard’s campus after Blizzcon 2016. As for how it took us this long to find his hilarious video, the world may never know.

Jonny lives out in California where he’s performed at the UCB theater, as has Zenyatta’s voice actor, Fedora Chin.

Jonny’s actually worked with other Overwatch voices in other animated series. In the animatedseries, The Stinky & Dirty Show on Amazon, he worked alongside Darin De Paul as Chopper and Chip respectively.

From an early age, Jonny knew he wanted to act, even as far back at fourth grade when he played Brom Bones in his school’s rendition of Sleepy Hollow. He wanted to be a rapper growing up, though it was dream his family would not support. He acted through high school and in college studied computer science, communication media, filmmaking and acting.

Jonny was born in El Paso, Texas and lives out in California now, but in early grade school he studied abroad in Wurzburg, Germany where he learned German, similarly to his fellow support hero…

Our guardian angel was born in Germany and started off as a gamer with the old systems, before becoming a bookworm and then transformed into a theater nerd. By the age of 14, Lucie Pohl had already appeared in a short film with John Daily.

Aside from being a tremendous actor, Lucie is also a comedian. She has written three solo comedy shows, including her one woman show “Hi, Hitler.” You can also catch her doing stand up in New York City. Don’t worry, if you die laughing, she can just resurrect you. Just make sure you’re the first to die or else you’ll have to wait 30 seconds for rez to come and cool down.

There’s also a chance you may have seen Lucie Pohl on the big screen a couple years ago. She was a secretary at the bank in Fantastic Beasts and Where to Find Them. If you spot her you might notice that just like Anjali, she too is tiny. Standing at five feet and one inch.

For those wondering who Mercy might be maining in Overwatch though, sorry to say, Lucie Pohl doesn’t game anymore. She admitted she’s worried that if she went back into gaming she’d get lost in it again. While maybe true, it seems it isn’t as much a concern for some of her cast mates.

In an interview where Charlet mentioned she plays Overwatch, she admitted that she is a Roadhog main. You might not expect it from Charlet’s past though. Back in high school she was on her school’s golf team as well as a cheerleader for the football team.

Unexpectedly, Charlet wasn’t in fact a theater kid. She said, she didn’t feel encouraged to pursue theater due to her Asian-American heritage. Of course, like any destiny though, the spark was always there, waiting to get it’s chance to shine. At the age of 5 she was discovered by a talent agent on a plane but her mom turned the offer down wanting her daughter to seek a “more realistic” career.

Charlet Chung is trilingual. She’s of Japanese and Korean descent and is fluent and literate in both languages.

If you ever decide to stop playing Overwatch, (I mean, I don’t know why you would, but let’s just say for the sake of this next fact) to play some Call of Duty, you can hear Charlet Chung’s voice as Seraph, one of the specialists in Call of Duty: Black Ops III’s multiplayer.

In fact, you might Crispin Freeman’s voice from a lot of different media. Crispin has been in animation, video games, television and arguably, what he’s most famous for, anime. Crispin is the voice of Hellsing’s Alucard, Naruto’s Itachi Uchiha, and many, many more.

If you look at Crispin’s credentials in animation, you may recognize him from Young Justice as hot headed archer, Red Arrow, or maybe in Steven Universe, as Connie’s dad, Doug Maheswaran.

Of course, we’re all here cause we know him as the lovable Winston, but that’s not the first Blizzard game you’d hear him in. If you’ve rolled a wizard in Diablo 3, you’ll find Crispin Freeman for your male choice. Crispin feels he knew the role well because he’d been playing a sorceress in Diablo 2 previously for over a decade.

Crispin had a Mac computer he’d play games on back in 1985, and is still an avid computer geek and gamer. He did play football back in high school though.

You can also hear Crispin in the World of Warcraft expansion, Warlords of Draenor as the Paladin, Maraud. In fact, he booked both Maraud and Winston in the same week to his own surprise as well as casting director, Andrea Toyias. Andrea knew Crispin personally when she was working on Overwatch and World of Warcraft’s Warlords of Draenor expansion and when his name came up on the list she said “I know Crispin’s a good actor, but I don’t think he can pull off a voice deep enough for Winston or Maraud.” His audition promptly, in her own words, blew her socks off.

And that’s all for now. Overwatch’s cast is full of amazing people and we could probably talk about them all day.

107 Battlefield V Facts You Should Know! | The Leaderboard