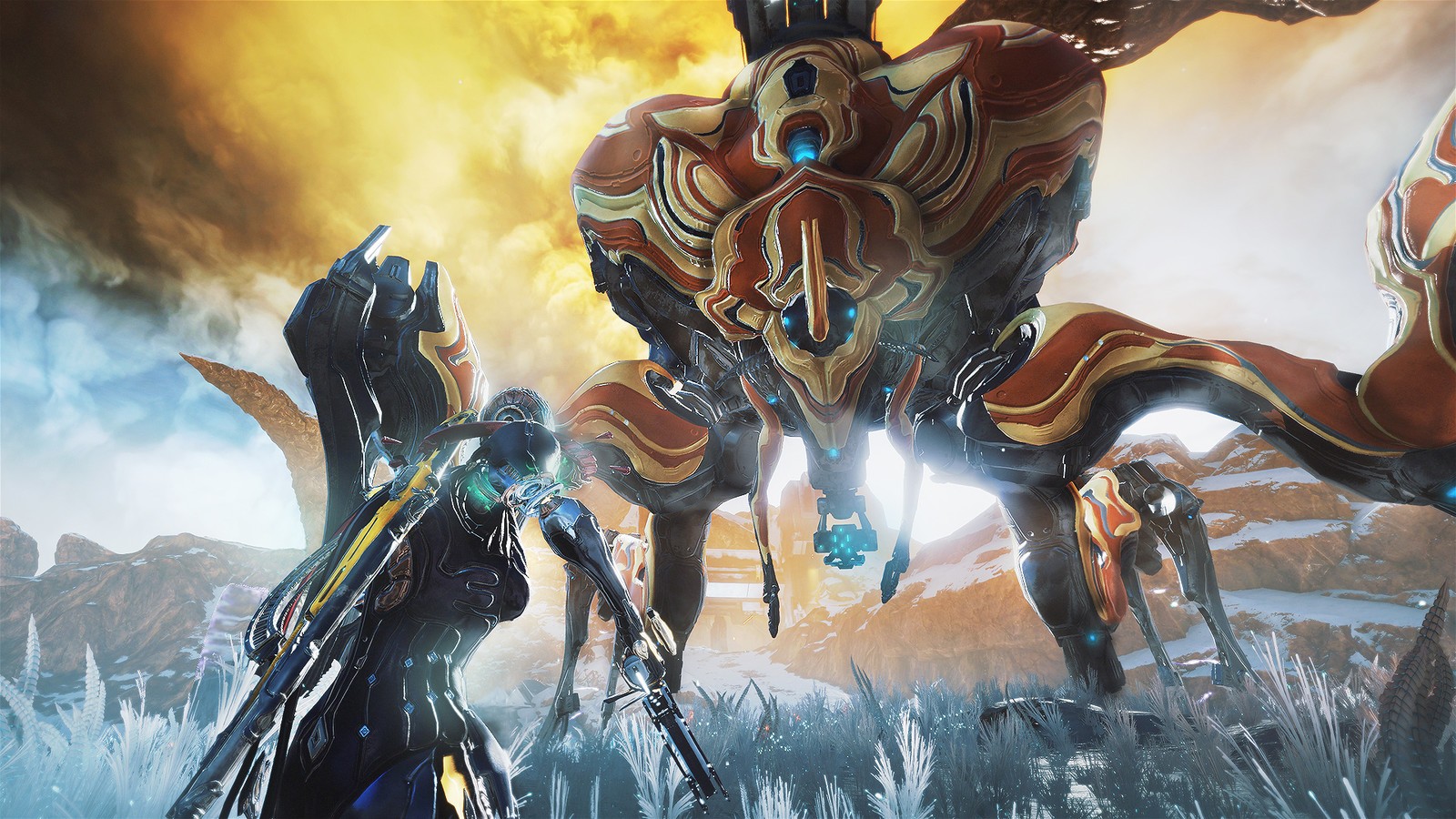 Warframe is one of the best free to play games of ALL TIME, with endless hours of content, a growing player base, and improvements and additions continuing to roll out TO THIS DAY yeeeaaars later. But we would be remiss to ignore the immortal words of Poison, forgetting that every rose does, in fact, have its thorns. As incredible as Warframe is, there are a few things that just drive even the most powerful space ninjas totally insane, and this cowboy’s sad sad song is a list of Ten of the things Warframe players hate the most. Buckle up, Tenno! This one’s gonna get bumpy…

1: Getting Staggered or Knocked Down

At its core, Warframe is a game about going really fast and being really cool. You’re from a godlike cabal of grey-fox type futuristic psychic cyber ninjas, after all. So when you’re in the groove, pulling off acrobatic stunts like the madman you are, nothing kills the flow, the mood, and the buzz more than being clipped by a wayward attack that happens to stagger you, if worse, knock you flat on your back, bringing a hard stop to your speedrun. Trying to zip past a wave of Ancient Healers feels like an exercise of capability under circumstances of extreme stress, because those big plant… somethings, could just snatch you out of the air at a moment’s notice. Or how about being swarmed by those annoying Grineer kickballs of death that just slam into your knees over and over to get you stun-locked. And don’t even get us started on the Bursas, who can be such a pain to actually defeat between their nigh-impervious armor and their constant shockwaves. I dunno about you guys, but I started playing Atlas just so I couldn’t be knocked around any more, it’s just… ugh, the WORST.

Speaking of enemies that give us Tenno headaches, let’s take a look at the sentients. No, we don’t mean the little Vomvalysts on the plains at night (though they can be pains in the butt for Tenno who can’t damage them yet). We’re talking about the hell things that are the Conculysts and Battalysts. You know, those weird looking guys encountered on the Orokin moon-base? Talk about absolute nightmares… these things have the oppressive ability to start accumulating damage resistance to whatever damage type you’re attacking them with, and they build it up suuuuuper fast. Seriously, it’s incredible! The idea is supposed to be that you swap weapons around to change what you’re hitting them with, but if you don’t know they’re coming? Or all your best weapons only have one or two damage types? You’re in biiiig trouble, and those moon-men become unkillable death machines. Oh, that’s right, I forgot to mention. While THEY become invincible faster than you can change to your secondary, they have NO PROBLEM killing you just as fast with a maddening array of beam attacks and Area of Effect attacks. Explorer beware, steer clear of the moon until you have as many different weird damage types as possible!

Everyone appreciates a change of pace now and again when it comes to their mission varieties. Sometimes you need a break after extracting 20 or more artifacts, after all, and might be looking for a quick pick-me-up mission before diving back into another big one. You know what mission type nobody has ever said that about? Poor old Hijack. The idea is sound enough, just push the payload like you’re playing overwatch to the end and done! Only said payload is charged by your precious, precious shields. And six billion enemies will take advantage of your drained shields by shooting you until you die. Now, you can just… step away to get your shields back, buuut then the payload starts going in reverse and you have to lose more shields to move it back. Not only that, but you’ll almost never happen upon other Tenno to team up and tackle the few ESSENTIAL ones on the star chart because… well, nobody wants to run these missions. Ludi on Ceres in particular can feel like a hard stop if you can’t power past it, so… maybe appeal to others who have beaten it for help? After all, everyone who can has been there before.

Speaking of nodes on the star chart that give us stress headaches, let’s talk about Kepler on lil old Phobos. For the unaware, Kepler is an Arcwing mission with the Rush type, so you gotta rush to the end of the map and take out a target before a tight time limit expires. It’s also gate-keeping another mission on Phobos, so you gotta finish it if you wanna complete the planet. Here’s the thing… it’s got an outrageously tight time limit. Like, REALLY narrow. The map’s tileset is a collection of narrow tunnels out of the last mission of Starfox 64, but ALSO lined with mines that slow your movement to a crawl if you get too close. If you wanna get there on time, you just need impeccable aim at incredible speed to shoot down all the mines, unmatched control of an amazingly fast ship so don’t slam into walls, and probably have a really powerful arcwing AND arc-gun juuust to be safe. Totally reasonable for a random side-mission on Phobos with no real rewards that you can’t get in any other, much easier arcwing mission, right? Right?

So, once you start getting into the thick of things and are ready to try and acquire some REAL power, most guides and other players are gonna start pointing you in the direction of the illustrious PRIME GEAR that can be found in the various relics you’ll come across while playing. And while, yes, that description is legally accurate, it is both more complicated and more time consuming than it seems. See, you don’t just crack open these relics like prime piñatas and expect to see what you we’re looking for, each piece of prime gear comes in pieces, usually four, and you’ll need em all of you want to build what you need. But wait! Each relic could produce what you need… or like five OTHER things, all with different rarities. And since we know the best stuff is the rare stuff, we’ll be grinding lots of copies of these relics so we can grind the relics until they drop what we need… for each part. And while you can team up with other players who might also be farming those relics to increase your chances of hitting paydirt, Almighty Lotus help you if you’re not farming the current hot new gear everyone’s chasing… you could be looking for a while.

Say you DO have to do some solo missions once and a while, or you’re just looking for a little extra companionship. How about a cool space dog? Or a sleek space cat? he Kubrow and Kavat are fun alternatives to the sentinels most people roll with, but… why is that? Who would want to use a weird drone thing over my cool purple Kavat Well it’s… there’s a lot of hoops tp go through and… ok, you have to feed your space pet. There, I said it. In the far flung future of my free to play space video game, I still have to feed my fictional space animal just like a real pet. But what does my Kubrow, Stinky, eat? Why, expensive syringes! OK, its technically a DNA stabilizer, but those bad boys cost 75,000 credits for a 6 pack, and if Stinky doesn’t get his syringe food, his maximum health will slowly deteriorate until he’s automatically put on ice where he’ll take hours to thaw. Stinky will even go on ice if I just… forget to log in for a bit! Now, I know you can upgrade your incubator to mitigate these issues somewhat, but that’s ALSO a lengthy and pricy process and… I just wanna run missions with my spacedog, guys…

7: Getting Screwed in the Index

So you’ve decided to invite a Kubrow or Kavat into your home despite the obscene cost of their syringe-based diet. How are you gonna make all that money? Why, the Index, of course! One of the best ways to make buckets of credits as quickly as possible, running the Index’s various levels with a full squad of fellow tenno feels foolproof. After all, this goofy game-show setup is against the AI, and they’re predictable. Easy. You can just do risky moves all day and be comfortable and confident that the corpus goons against you just simply can’t keep up… until they do. It’s twenty seconds until the end of the match, and suddenly you drop dead near their goal, and you drop the 19 points you were hoarding for the big combo score… right… in front of… where they score it. Its too late to get them back, and some weirdo on roller skates just dumps them all into the goal to swing the game entirely out of your reach. The only thing worse is when it isn’t even your fault, but the rando in your room who’s trying to punch above their level. But hey, its only another, what, 30-50 thousand credit wager to try again?

While we’re on the subject of enemies that are major headaches, I don’t think there are any enemies out there that have gotten in the way and ruined more speed runs than the Corpus Nullifiers. Those… accursed nullifiers, with their obnoxious blue bubble shields and their corpus-brand bucket helmets. The problem with nullifiers is three-fold, first being that their shield takes damage in really weird ways, so you have to be more specific with how you damage it than you might think. The second, is that once you do the work to take down that shield, it’ll be back up and running pretty quickly if you don’t take care of the corpus unit itself. But the third and most awful is that, if you DARE to go inside the shield? All your buffs, gone. Not suppressed, mind you, just outright deleted. And when so many builds DEPEND on their buffs to be able to, you know, do anything, getting stuck in a nullifier’s zone can be CRIPPLING. Oh, also, hope you’re set to fight the Corrupted ones too, which have, you know, better shields and lots and lots of distracting, shiny, golden detailing.

9: Running too Long or too Short on Survival/Extraction

10: Those Guys that Fly around the Plains and Blast You When all you Wanna do is Fish

If you thought the rest of the stuff was bad, don’t you worry. We saved the most annoying, hated thing for last. Imagine if you will, you’re on the Plains of Eidolon. It’s a gorgeous day, and you’ve got your equipment to go fishing, or perhaps mining, because you need some materials and fancy a little break from the jump shooting and melee combos. But wait, what’s that noise? That roar overhead. No, it can’t be… not now… but it is! Those… HORRIBLE… RELENTLESS Grineer Dargyn pilots. Screaming through the sky at a billion miles per hour shooting anything that moves from miles, they are the bane of existence for everyone just looking to try and get some cetus whisps or some gemstones. But the worst part? There’s never just one. Once they pop they CAN’T stop, after all, so if you see ONE of these screaming hellions, you might as well consign yourself to an endless assault because they’ll never, EVER, go away.